To share your memory on the wall of Margaret Benda, sign in using one of the following options:

Provide comfort for the family of Margaret Benda with a meaningful gesture of sympathy.

Print
Margaret A. Benda, 88, a resident of Calumet passed away peacefully at her home on Friday May 24, 2019.

She was born on December 2, 1930 in Calumet to Gustav and Lempi (Aittima) Junttila where she grew up in Raymbaultown.

She was born on December 2, 1930 in Calumet to Gustav and Lempi (Aittima) Junttila where she grew up in Raymbaultown.

She attended the local schools and graduated from Calumet High School with the Class of 1948. After high school, she then went on to receive her Bachelors Degree in 1952 in teaching with specialty in teaching the deaf from the Michigan Normal College, (now known as Northern Michigan University).

On June 21, 1952, she was united in marriage in Hancock to Edward Benda and they made their home in the Detroit area (Berkley and Farmington Hills).

Margaret began her teaching career at the Lutheran School for the deaf prior to starting a family. She had 9 children and returned to teaching after renewing her teaching certificate at Eastern Michigan University first as a substitute teacher and then full time teaching in the Farmington Public Schools after the children got older.

Her family spent summers at their cottage on Windover Lake near Clare, MI where they enjoyed frequent visits from many friends and relatives

The family also enjoyed numerous vacations to the Copper Country at Big Traverse and Calumet.

Margaret moved back to Calumet after retirement permanently in 1999.

Margaret enjoyed going skiing well into her 70’s. She would often take trips out west to Colorado to ski. She was a member of the National Ski Patrol for several years. She was also an avid scrabble player, and had an ongoing competition between her and Mrs. Janet Odell.

Margaret loved to travel taking trips to Finland, Hawaii, and other countries where her children worked.

Margaret was a member of the First Apostolic Lutheran Church of Calumet, National Ski Patrol, Topps and the Birmingham, MI Musical.

Her sisters-in-law Shirley Morgan of Laguna Hills, CA and Angie Junttila of Big Traverse, MI
And numerous nieces, nephews, cousins and many friends.

The funeral service will be held at the First Apostolic Lutheran Church of Calumet on Tuesday June 4, 2019 at 11:00 am with Pastor David Taivalkoski to officiate.

Burial will be in the Lake View Cemetery in Calumet.

Provide comfort for the family by sending flowers

We encourage you to share your most beloved memories of Margaret here, so that the family and other loved ones can always see it. You can upload cherished photographs, or share your favorite stories, and can even comment on those shared by others.

Christian & Dayna Stolz and The McKinnons have sent flowers to the family of Margaret Annette Benda.
Show you care by sending flowers

The McKinnons purchased flowers for the family of Margaret Benda. Send Flowers 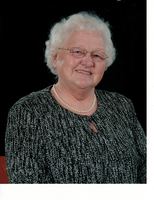